​Start of the real belief.   Humble yourself like a child.

Faith like a child is the greatest in God eyes. A child accepts something with Absolute Faith until proven wrong. What other option is there really, disbelief thwarts supernatural thoughts unnecessarily turmoil.  If it isn’t disbelief cornering the ideology, God does through His word.  What Father says goes, handle it accordingly.

PAST NOTE 2013/14:  Apologize for the non-formal hair, lack of concern of clothing/appearance, soft spoken communication style in this video that is a bit long winded, or whatever outer appearance you judge by that causes the legitimacy of what I'm saying to not get through.  I care, I’ve been fulfilling objectives prior to final presentation.  In the meantime, take home some take homes. 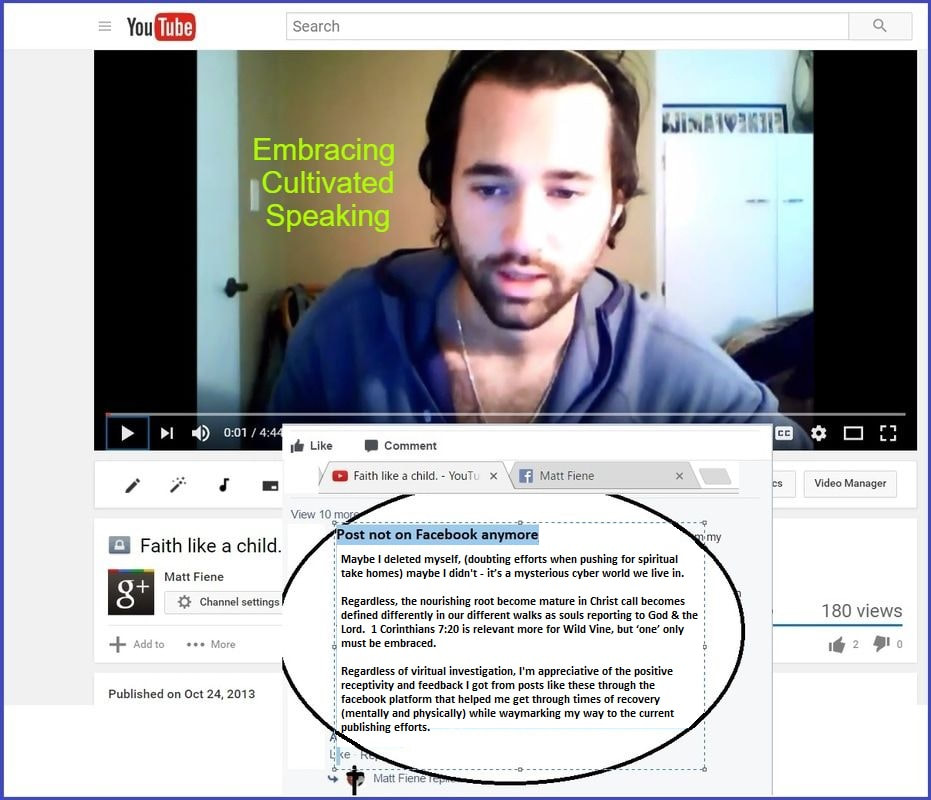 You may be a fully grown and mature adult. You may be successful in the ‘real world,’ but that doesn't mean we should neglect being open minded, where dismissal of additional reflection is either a failed form of leadership or a lackluster dodge attempt to the reality that this religion is still very much part of the real world.  Being open minded to a necessary concept of belief that highlights love and good conduct with a creator playing within the equation, that is also in line with our instincts of survival, shouldn’t not be an ingredient or piece of the puzzle that fits into an appropriate conception towards ‘thereafter.’  You don’t look naïve to hold a stance of belief that miracles did occur, you do look sly if you don’t have to go there and misaddress the component of belief totality that is the deciding factor on the upfront allegiance to the stance itself.

A child may pretend with toys to have supernatural thoughts and hear a story about Moses parting the Red Sea and be exited, an adult can come with terms and the speed of development and the isolated scenarios and ways the miracles came about with a sober reality.  The component of belief, instituted through the book, requires distant time frames of slow run-of-the-mill development, and we already know a threshold already set in place will never make an undeniable verifiable superman outcome in front of the masses.  Yet the child in us recognizes the God of our belief isn’t bound by man’s limits.

The practice from writer to writer has consistency, the heart of the intentions were for good and well being of the life around them, the development of mankind’s past and social progression shows difficult leadership that protected people and created time and execution.  Part of mankind’s fault, is we don’t execute to our greatest understandings.  We at times fail to recognize the full affect diet has in changing our bodies, before computers micro data was more a novelty conversation, yet God and His teams of angels very likely control each bacteria and cell with access to manipulate according to plan and terms with Satan.

I need this within my realm in this area, 5 untimely deaths, 3 persecutions, 2 addiction temptations, 10 inner spiritual violations between 3 congregations, says Satan to God.  Get to work says God to His angels, make sure those written in the book of life don’t face anything beyond their means, even if they stumble or take a step backward during a darker time in their lives.  To even pray and reflect upon the reliance we have for a Creator and Lord in control of our future, is the humility a child has within when accepting the parents control.

A young child, when he or she listens at the time of receptivity, doesn't first know any better but to humble themselves and accept something with absolute faith from an adult or older person.  It may seem a bit out there from the logic you've become familiar with in your everyday life, to stop your thoughts to pray out of reverence of the situation, but this 'religious duty' plays a part in allowing us to have better control of our thoughts, within the true reality of now and things to come.  It isn’t always healthy to try and control our every outcomes, sometimes the best action is trusting in the promises of God’s justice.

You first have to believe the bible to be an authentic source of writing for a purpose to help us know our creator and His intentions.  Instead of thinking of all the reasons you know why the bible seems to be outdated or wrong (disbelief), take a step forward with childlike faith and TRUST there is a reason behind these writings that not only ring true on the most important aspects of life (relationship expectation) but has played such a dividing role (both productive and unproductive) throughout the generations of adherence to its expectations.  If Jesus didn’t come to endorse family’s keeping to themselves maximizing their growing inheritances, but rather came to say that which was foretold in advance to be accepted by some and rejected by others, then the dividing factor is known by people who accept the teachings of the Holy Spirit to exceed in value the total compromise of the matter.  Eventually, we have to grow up and interpret the exact intentions of the writings. You could accuse isolated verses, but it takes proper reason to defend the intention of the word to develop our earned effort.

There is a language that can’t be neglected, so we measure Christs nature correctly.  Is it really true how some of us (myself years back) feel such fury against religion? Very true within the equation!  Additional allegoric word usage, where we must interpret things or associate proper spiritual meaning to these verses above, supported here in Hebrews 4:12, Ephesians 6:17, Revelations 1:16, Revelations 19:15. Part of the human spiritual life cycle of the Christian call, is overcoming the divides and associations of the belief, or learning to let people be free to choose peacefully feeling as they do when exposed to the word, or they need not object.  Just like parables make you have to try harder, just like people didn't need to go there when Jesus intentionally said things as blunt forward as he could 'eat my flesh and drink my blood,' sometimes we have to want to try, given we kinda have to get ourselves out of debt with God, since He did the work of creation.
Skip (if you like) Spirituality and Scroll Duty (blog) tabs and refresh yourself  at the 'LAW OF LOVE' tab(s)
Powered by