See the circumstances behind the actions for the sake of not over analyzing; don't leave the wrong taste in your mouth!

When a parent teaches their child something new (like sharing, following rules or being respectful to others) out of love they see past their child's current selfish faults and teach in a way to hopefully set their child down a more fruitful path in life. The parent accepts they will have to be the bad guy - even when their child mocks, argues, and fights with the teachings that seems so foreign and absurd to the inexperienced child at the time. ‘Why should I share my toy?’ whines the kid.

Learning to get along with others in a proper way is part of creations resolute human interaction programming to get you right in your immediate relationships along with the relationships you will form later on. The parent knows the wisdom behind sharing and must prove true in their conviction to this teaching through for their child.  The loving parents will always see past the current actions of their child and will teach however they must in order to properly develop their child.  Sharing gives you a better knowing of how to be included right young child!

Are we that naive to think as grownups we really have all the answers? However, do we ourselves - as full grown adults - really have it that much more figured out than a child? Are we too skeptical as we grow older?  Full grown adults hated blacks because they had different imagery than the going evil teachings of mainstream society. Even some churches accepted this harsh way of not loving your neighbor, rather highlighting yourselves and diminishing the slaves. Full grown adults followed the hate that Hitler directed towards millions of Jews that were tortured and killed in concentration camps. How many wars and evils have stemmed from human precepts and doctrines where you follow the crowd and gossip slander justification becomes legal? How much evil has occurred from man using the context of our own human nature to manipulate the masses for self-centered agenda's?  Be weary of people who do not endorse someone willing!  Be reserved to those who want to boast in your flesh!

How many times in our history have we thought something to be acceptable upfront (both religious minded people and non-religious) only to turn out later to be completely unacceptable and even embarrassing later on? How many times throughout our history on earth have the blind been leading the blind? Thousands of years pass and we still can't keep peace. How experienced are we as humans? You enslaved people because you thought people were property and you could wickedly control other free thinking souls, that the institution of slavery was justified, without thinking spiritually on the other thinking human mind before you.  Avail them freedom already!

If there is a God, He might be proving a point that we should learn to trust Him and the proper teachings He relays to us.  He gets to control because He made Himself that much more mighty from the beginning, but doesn't want the comparison that He controls us that illegally, especially for eternity to come.  Yes he allowed concepts of slavery to become manifest in different era's to create visuals and distinguished adversity experience (He wants us to learn the servant mentality and how Jesus also embraces authority through execution/implementation and following rules properly) as he gave grace and love through adversity all along the way.

Most of us are familiar with the Christian teaching where Adam and Eve decided to fall victim to deceit by their actions after being tricked in the garden of Eden to take that bite from the forbidden fruit.  The teaching taught us that their actions spoke ‘I'm days old but I know better than you God. I know what is better for myself, I'll choose my own path.’  Yes they are not actually guilty from one Romans lawyering angle (without the law there is no guilt), but their guilty if they can't recognize God is going to make us acknowledge His ability and direction over our own. God says 'first off people, I made the rules and requirements, this is how I get to exist – you must follow me.’

Now I'll state the obvious we all know - doctrines & religion have played a huge part in wars of the past and present (some good too). Whether you compare the bible's authority to a comic book or to a holy book of God, one thing we can't deny is the effect it has had on the masses, which has influenced a major part of the destiny that has played out in our history. If God created everything like a video game programmer makes scenarios and levels to play-out so that we learn through preset situations and environments, then the bible and the teachings were meant to be in creation for His specific purpose.  You were meant to mess up and stumble in order to learn.  You were meant to be given in to that money reaction.  You were meant to be given in to this or that self-control decision.  Yea it's true God is completely putting Himself over you! But it wasn’t a crazy request you could have complied to, or reasoned with!

Where would society be if we weren't held to the moral codes of not judging others, forgiving, and Loving others as ourselves? Would things be better or worse? Would we be lead by tyrants that ruthlessly made their way to the top if there wasn’t the good teachings of the bible?  Maybe maybe not, ongoing bloodshed gives no assurance one way or the other. What if there weren't the strict rules? Would we have all liberally found peace with less or no wars?  Hard to know, not really relevant if you believe in prophecy, but it goes both ways..

What would have happened if Jesus didn't include hell being part of the equation, or warn about ‘sexual immorality’ being a condemning sin? Would we not respect our relationships of marriage as much? Yes, it is true Jesus stood up for and forgave the sexually immoral right in front of the hypocrites, but maybe Jesus did us a favor saying things so strict for our own good? Lust can cause huge dysfunctional issues of jealousy and rage.  WWWIIII might have occurred otherwise by now..

SUMMARY: Out of love a parent see's past their child's current mishaps and will do whatever it takes to get their child on the right track. They won't give up because the Love they have for their child is stronger than all the obstacles standing in their way.

Why should getting older change this concept on how we treat and Love each other? When someone wrongs you, out of love see past the action on the surface and look for the reason behind it (or give the benefit of the doubt and don’t over speculate). We all have insecurities and our faults. Before you let the actions of someone else control you, remember there's likely a good reason on why they developed the behavior that currently is making you mad. Out of love, don't give up on your neighbor - do what's right and it will feel right after you reflect on it.

When you Love first, even if it means swallowing your pride, holding back your anger, no longer keeping records of all the ways you have been wronged by this or that person in the past, you know what happens? You stop judging people based on actions that could warrant further discussion and you start forgiving the scenario without even realizing it (remembering every little way you have been wronged or snubbed is mentally exhausting) and real fruitful change occurs in your own mentality because you give more proper grace to more total people.

The Light of Love within you shines brighter than the darkness holding them back. You become an encourager, who can swallow your pride (otherwise you boast in your flesh) because you learn to build people up instead of tear them down by lessor resolve. You learn to forgive, and it's a better way to live and it heals the disdain you store up within you by unnecessary short sided measures, not seeing past the circumstance with the full grace of the Spirit.

When someone knows you aren't giving up on them, not forcing unnecessary control, it's very powerful and creates loyalty. Open your eyes and see past the action of the person and fight the reason behind the action by fighting it with Love. Loving your neighbor as yourself means forgiving that person as you would want them to forgive you had the cards been reversed.

Love = not giving up on your neighbor. 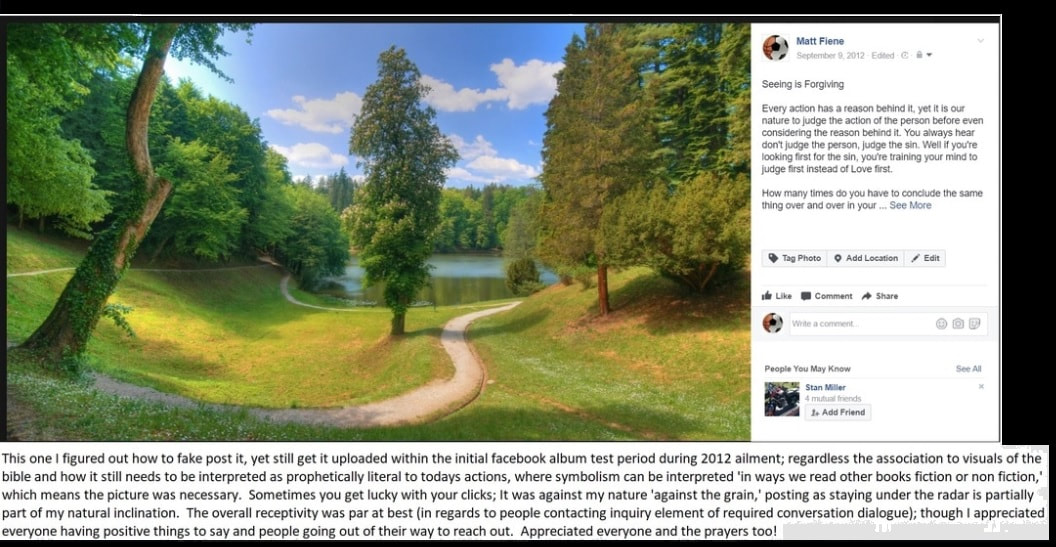